Is voodoo part of Halloween? I mean, they’re both spooky and stuff, so why not? Actually, lemme quick Google this … well, kinda. Maybe. I don’t know. Whatever. Let’s start over.

It’s Halloween time! So in the spirit of the holiday, let’s get spooky and head on down to New Orleans, the home of voodoo. And it’s technically known as Voodoo-Catholicism, and I’m not touching that with a 10-foot potomitan.

All righty then. Let’s just get to the casino slot review, m’kay?

Thunder Cash Voodoo Magic is a title from Greentube, and I tried my luck with it over at BetMGM online casino.

It’s pretty cool, all in all.

With an RTP of 95% — and a chance at legitimately huge jackpots, even at the 20-cent spin (it goes up to $100 a spin if you’re so inclined) — the gameplay is simple and pleasant to look at. OK, yes, fine, the “pleasant to look at” part means we’re talking about another slot with a cartoon woman who is objectively gorgeous for a cartoon. In this case, she’s a buxom brunette wearing what appears to be Slash’s hat.

I’d love to see the research on what makes men play a certain slot machine, and — speaking as a man — I’m sure I’d be both horrified and in complete agreement to find out cartoon hotties don’t hurt the bottom line. Anyway …

Our top hat-wearing woman is the wild in the game, and she can appear on reels two, three, or four. And one interesting wrinkle about the gameplay: There are no paylines. You don’t need three freaky-looking voodoo dolls in a row to win a prize; they can be anywhere on the reels, so long as they are on consecutive reels. 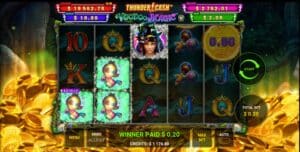 There are, in fact, 243 combinations of the aforementioned freaky-looking voodoo dolls, tarot cards, potions, maracas, and the classic voodoo 10-A playing cards that pay out.

Additionally, get six or more scatter symbols — in this case, a gold coin, which also looks a little bit like the maze in Westworld — and you hit the bonus round.

In the bonus round, each coin comes with a dollar amount printed on top of it. The original coins that triggered the bonus get locked, and you get three spins to get another coin. If you do, you get three more chances, and so on. Once you strike out, the bonus ends and you win all the money on all the coins. 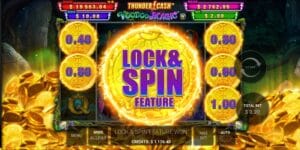 Like any quality voodoo action, the screen is dark, foreboding, and spooky. There’s some mildly creepy music playing the background, and the images — especially those voodoo dolls — are kind of off-putting.

Every so often there’s a cha-ching of coins cascading down the screen, but it doesn’t mean anything. It’s just a feature of the game, probably there to encourage you to keep spinning. Truth be told, the encouragement isn’t needed, as the “major” and “grand” prizes are right there on the screen, constantly ticking up. That’s encouragement enough.

Well, I was an outlier here. I spun 25 times at 20 cents a pop and hit the bonus twice. My results are clearly bonkers — you might say some voodoo was involved — but I ended up profiting over $23 on the deal. (Remember, I’m also getting paid for this. Talk about voodoo.) 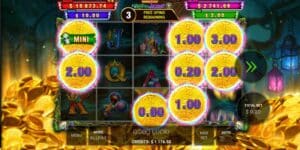 Also, I forgot to mention the buxom brunette is holding a cane with a tiny skull on top. If I were a cartoon man, it wouldn’t stop me from asking her out for dinner, despite the very real possibility my head might be shrunk by dessert. A man’s gotta man, what can I say?